Research generated by BDC is often presented at recognized national and international scientific meetings and published in peer-reviewed journals. Partnering with academia and publishing are considered fundamental to our mission.

This study investigated a polymer-based skin barrier to prevent and treat irritant contact reactions. The product is an acetone and polymer-based skin coating technology that is applied to the skin as a liquid that rapidly dries (~15 – 30 seconds) to form a thin film.
Irritant and allergic contact dermatitis affect approximately 10% of adults and hand eczema, in particular, represents one of the four most common occupationally-related diseases, accounting for substantial lost earning potential in otherwise healthy populations. Hand eczema is the most common occupational skin disease and occurs regularly in professions such as mechanics, textile workers, hair dressers, and especially healthcare workers.

A nonrandom, convenience sample group of 26 adult male and female healthy volunteers aged 21-69 were enrolled in the study after signing informed consent. The 26 subjects were equally divided between whites and Hispanics, healthy by self-report, and had intact skin free of tattoos, scars, moles, vitiligo and keloids in the test areas. The 8-day study (6 visits) was conducted in a laboratory setting to control for environmental factors. Participants served as their own controls.

IRB approval, consent, and baseline measurements were completed. The designated treatment was randomly assigned and then applied to each of the sites described above.
Sixty μl of an aqueous solution of 2.0% SLS was pipetted onto a layer of filter paper placed in each of several aluminum Finn Chambers® (Allerderm Laboratories, Petaluma, CA), which were affixed to the sites with hypoallergenic tape. On day 2, the Finn Chambers and barrier products were removed and all sites were scored for irritation and evaluated for TEWL. The study ended on Day 8 and final measurements were taken. 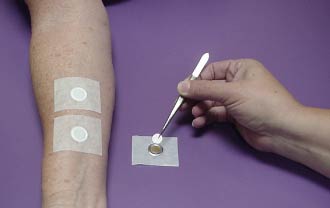 Figure 1. Filter paper saturated with SLS was placed into Finn Chambers and affixed to the test sites on the study subjects. 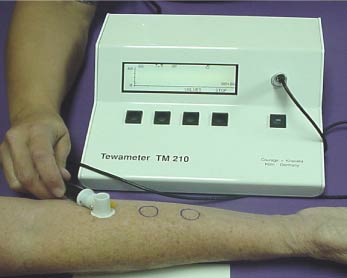 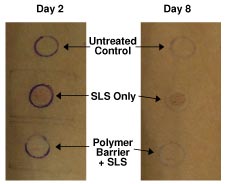 SLS elicits a strong irritant response on the non-protected “SLS Only” test site. In contrast, the polymer skin barrier protects the skin from contact with the SLS irritant (Polymer Barrier + SLS site) and has a similar appearance to the untreated control. By Day 8, the irritant response has lessened considerably, but is still clearly visible. Note the small horizontal line of erythema on the lower-third of the “Polymer Barrier + SLS” treatment sites, which is likely the result of inadequate coverage of the polymer barrier on the skin.

The novel polymer skin product is an effective barrier to irritant contact dermatitis. When applied to irritated skin, the polymer coating improves skin barrier function as effectively as petrolatum. Applying the polymer barrier does not adversely affect normal skin.