Research generated by BDC is often presented at recognized national and international scientific meetings and published in peer-reviewed journals. Partnering with academia and publishing are considered fundamental to our mission.

Objective: Iocide® disinfectant solution was investigated for treatment of Pseudomonas aeruginosa biofilms using the ASTM method E2196-02, with minor modifications.
Methods: Pseudomonas aeruginosa biofilms were grown on 13 mm diameter x 1 mm thick, sterilized, hydroxyapatite disks (coupons), under the conditions of constant fluid-shear and temperature (37oC). The conditions of this experiment are similar to those of other standardized disinfectant efficacy tests (i.e., AOAC). At the initiation of each experiment bacteria were allowed to attach to the coupons for 2 hours, prior to the initiation of media flow and shear. The stir plate was then initiated to provide mixing and shear force. The biofilms were allowed to form for a period of 48-hours, obtaining thicknesses of approximately 80 micrometers. Following biofilm formation, the colonized hydroxyapatite coupons were harvested and briefly soaked for 1 minute in sterile dH2O to remove unattached bacteria. The reactor coupons were then subdivided into two sets for treatment, with one set of coupons challenged with undiluted Iocide® for 8 hours at 22+1oC. The second set of coupons was left untreated to serve as controls.
Results: The results of three separate experiments showed that undiluted Iocide® treatment for 8 hours caused an average 7.2 log10 reduction in CFU/cm2 compared to controls. These experiments showed that over the time tested, Iocide was very effective at treating the biofilm.
Conclusion: Iocide® treatment shows significant efficacy in killing biofilm bacteria.

Iocide® is a novel antimicrobial agent developed for commercial applications, specifically for treatment of biofilm associated with hemodialysis and dental waterlines (Dentacide®). In addition to having antimicrobial and anti-biofilm properties, Iocide is non-toxic, non-carcinogenic, and not harmful to the environment.
To evaluate Iocide against Pseudomonas aeruginosa biofilm, a rotating disk reactor was assembled to generate biofilms in a continuous flow and fluid-shear environment. Test materials were used in the form of small, round “coupons” that were placed within a reactor rotor. Six coupons on which biofilms were formed were placed in the reactor rotor and submerged in the continuous-flow culture. The reactor was then incubated according to the appropriate conditions to support biofilm growth. 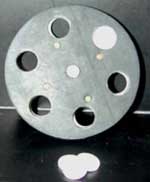 In vitro MODEL FOR BIOFILM FORMATION:

Figure 2. Schematic of the dripflow reactor.

Undiluted Iocide treatment for 8 hours caused an average of 7.2 log10 reduction in
CFU/cm2 compared to controls. These experiments showed that over time, Iocide was very effective at treating biofilm. 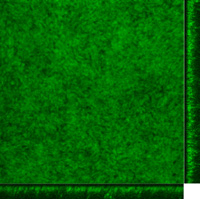 Figure 3. Images of Pseudomonas aeruginosa biofilm grown in rotating disk reactor, including top (xy) and both side (xz, yz) views.

Table 1. Data from the triplicate testing of Iocide treatment of PAO1 biofilms versus untreated control.